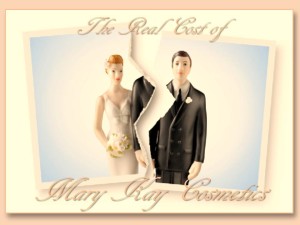 Experience With Mary Kay: Everything started in July of 2011 when I was at a breakfast networking event for my fulltime job as a commercial lender.

I was approached by a Mary Kay sales director who said she had seen me across the room and knew I was a smart, intelligent, and successful women who would be great for an campaign she was doing on successful working women.

So, of course, I was flattered and I gave her my business card. Within a couple of days, we got together so she could give me a makeover and take a picture. The funny thing was, she did a make-over but somehow “misplaced” her camera. So no photo.

In fact, I do not think there was ever any ‘successful women’ campaign. But, I did not even pick up on that then. And next you know, I had been successfully convinced that I could make a career with Mary Kay to replace my current career while spending more time with my family (exactly what I was looking for as a fulltime working mom of 2 kids).

Before I continue my story, it is important for you to know that I am a type A personality that only knows how to give everything 100 percent. I only know how to operate one way–full speed.

So now that I had decided I was going to be a Mary Kay sales consultant, I was going to do everything I was supposed to do so I could be successful. My sales director had convinced me that, within 6 months, I could have a successful Mary Kay business that would produce enough money to replace my current job. So I went full force ahead.

I was my sales director’s dream come true. I got a Mary Kay credit card day one and purchased enough inventory to service six women with roll-up bags. I was told that was the only way to be successful- have inventory on hand. So that is what I did.

However, knowing that my husband was not going to like me spending so much money, I just didn’t tell him. I justified it with the fact that I was going to make back the money and more so he didn’t need to know.

Lucky for me, I have always been in charge with the finances, so I could get away with spending without him really knowing.

This was the beginning of the fact omission and truth stretching with my husband I engaged in as a sales consultant with Mary Kay.

For the next couple of months, I did what I was supposed to do. I held skin care classes, I asked all of my family, friends to buy product for me, and I continued to buy inventory.

I was working 40 hours in my fulltime job and another 20+ as a consultant. I never saw my family and was constantly justifying to my husband why I needed to be away.

My marriage was becoming very strained, and I was not seeing the profit I was told I would be making.

So I approached my sales director. I was told I needed to “stretch”, I was not asking the “right” people for skincare classes, I was not “sharing” enough and needed to find my “rich” friends.

I was also told that I needed to go to our National Retreat and that my husband needed to go because he needed to see how great MK was. So I did just what I was told, signed up for the retreat.

However, my husband was adamant that he was not going. So I left that be.

Well my sales director was not going to let it be and after a simple couple pizza dinner turned from a simple get to know each other dinner to a retreat convincing session things went from strained to worse with my husband.

And I started to see a side of my sales director I hadn’t seen before. Intuitively, I knew that things didn’t seem right.

I wasn’t making the money I needed to in order to produce a profit.

I was never seeing my kids, and my relationship with my husband was strained.

But I struggled with admitting that I made a bad decision. I had talked up Mary Kay so much to my friends and family. I had convinced myself I was going have a different life and spent six month trying to create this.

I had spent significant money that I could never get back. How could I just walk away from this? I would look like such an idiot. I struggled with this decision for a while.

But I was able to come to the conclusion that what I thought I could get from MK was never going to happen. It was impossible.

And I was not willing to lose my husband and miss my kids youth over it. So walk away was what I did.

And then I realized that a number of my former MK consultants and sales directors had experienced similar things.

I can only hope that someone reads this and saves themselves from the lies and deceit of MK.