“If you repeat a lie often enough, it becomes the truth.”

These are a few of the questions raised and addressed in this article. After you’ve learned about Propaganda Techniques (and other manipulative tactics), you can decide for yourself if you’ve become another victim of of Mary Kay Cosmetics’ predatory tactics.

As has been pointed out elsewhere on F.A.C.E.S., Mary Kay Cosmetics’ sales forces uses predatory tactics to lure women into buying or becoming part of Mary Kay. If a person knows how to recognize the techniques as they’re happening, Propaganda Techniques and other manipulative tactics are easy to spot. 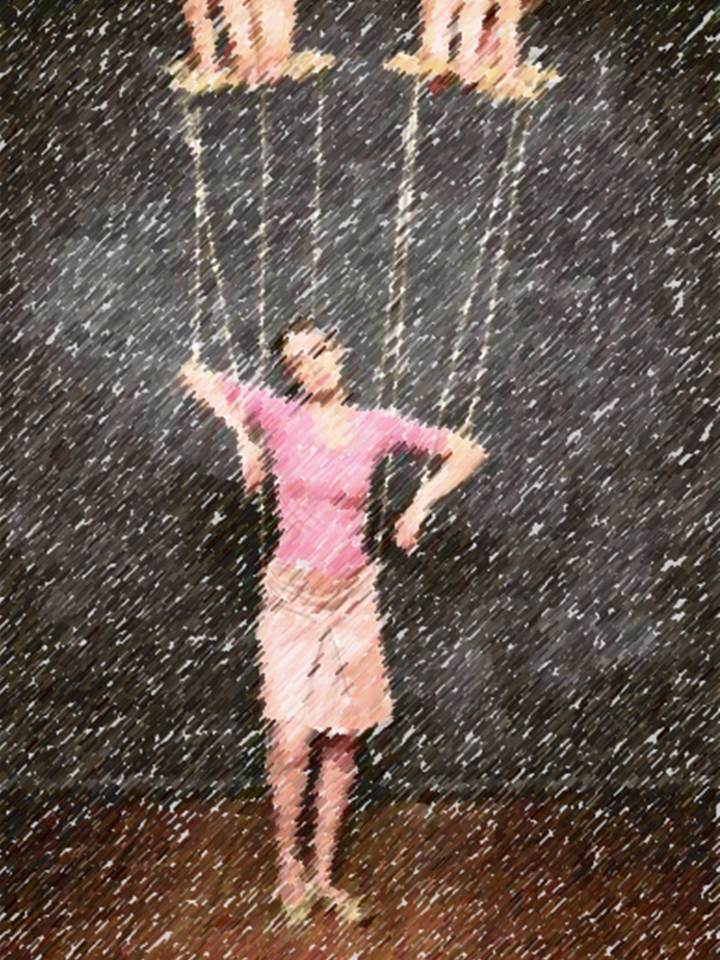 According to Dictionary.com, Propaganda is defined as:

Propaganda, in varying forms, has been around for a long, long time–as far back as ancient Greece. By today’s standards, early forms of propaganda were rather crude and were used for both positive and negative purposes–for good intent, as well as ill intent.

Today, with the advent of technologies like mass media, radio, TV and the internet, we are constantly exposed to both good and bad propaganda, day and night. We get it from politicians, from advertisers, and from the media. We hear it on the radio, we see it in movies–we are bombarded.

While we see and hear propaganda techniques every day of our lives, we may not always recognize them for what they are.

In late 1930s, the Institute for Propaganda Analysis (IPA) identified seven basic propaganda devices (or techniques) that are used in the dissemination of propaganda.

While not all forms of propaganda are used all the time by the propagandist, usually there is at least one or two deployed from the propagandist’s arsenal at any given time to influence opinion.

Here are the seven Propaganda Techniques, as identified by the IPA:

Do you recognize the propaganda techniques Mary Kay Cosmetics’ sales force uses on its targets?

Glittering generalities are words that have different positive meaning for individual subjects, but are linked to highly valued concepts. When these words are used, they demand approval without thinking, simply because such an important concept is involved. [Source, Emphasis added.]

“We believe in, fight for, live by virtue words about which we have deep-set ideas. Such words include civilization, Christianity, good, proper, right, democracy, patriotism, motherhood, fatherhood, science, medicine, health, and love.

For our purposes in propaganda analysis, we call these virtue words “Glittering Generalities” in order to focus attention upon this dangerous characteristic that they have: They mean different things to different people; they can be used in different ways.

When someone talks to us about democracy, we immediately think of our own definite ideas about democracy, the ideas we learned at home, at school, and in church. Our first and natural reaction is to assume that the speaker is using the word in our sense, that he believes as we do on this important subject. This lowers our ‘sales resistance’ and makes us far less suspicious… [Source.]

Testimonials are quotations or endorsements, in or out of context, which attempt to connect a famous or respectable person with a product or item. Testimonials are very closely connected to the transfer technique, in that an attempt is made to connect an agreeable person to another item. [Source, emphasis added.]

There is nothing wrong with citing a qualified source, and the testimonial technique can be used to construct a fair, well-balanced argument. However, it is often used in ways that are unfair and misleading.

The most common misuse of the testimonial involves citing individuals who are not qualified to make judgements about a particular issue. [Source, emphasis added.]

Card stacking, or selective omission, is one of the seven techniques identified by the IPA, or Institute for Propaganda Analysis. It involves only presenting information that is positive to an idea or proposal and omitting information contrary to it. Card stacking is used in almost all forms of propaganda, and is extremely effective in convincing the public. Although the majority of information presented by the card stacking approach is true, it is dangerous because it omits important information. [Source, emphasis added.]

The essence of Mary Kay Cosmetics’ (and many other Multi-Level-Marketing companies) predatory sales tactics centers on Card Stacking.

May Kay sales recruiters focus on what “can” be made while omitting the fact that the vast majority of women in Mary Kay do not make what is hyped.

The quickest and easiest way to see through this tactic is to recognize it, then ask to see actual net earnings break downs.

For example, in Canada (where Mary Kay actually reports consultant income), only 19 out of more than 33,500 made more than $100,000 in 2012–that, of course is not counting their taxes, inventory or any other business expenses.

Bandwagon is an appeal to the subject to follow the crowd, to join in because others are doing so as well. Bandwagon propaganda is, essentially, trying to convince the subject that one side is the winning side, because more people have joined it. [Source, emphasis added.]

The basic theme of the Band Wagon appeal is that “everyone else is doing it, and so should you.” Since few of us want to be left behind, this technique can be quite successful. However, as the IPA points out, “there is never quite as much of a rush to climb onto the Band Wagon as the propagandist tries to make us think there is.” [Source, emphasis added.]

Use of the Band Wagon is another way the Mary Kay propagandist sells Mary Kay to women who are unaware of this propaganda technique.

Indeed, the tactic is widespread in much of the company’s own materials.

Mary Kay claims to be the top-selling skin care company in the world. However, this is a half-truth.

The company, which only tracks sales to Mary Kay consultants, does not track its sales to end users (consumers).

As a result, it has no idea whether its consultants are selling their inventory directly to consumers on eBay.

This means that, using the Band Wagon technique, a consumer hears (and is led to believe) that women everywhere are using Mary Kay when, in actuality, the company can only claim the sales it makes to its consultants. Many of these consultants are sitting on tens of thousands of dollars worth of inventory in their homes–on shelves, in their basements, or in their attics.

Fear and Proof by Assersion

There are two other areas that some propagandists use that are not included in the IPA’s seven Propaganda Techniques. In addition to being used by propagandists, these two additional techniques are often used by cult leaders as well.

The first is ‘Fear‘ and the other is commonly referred to as ‘Proof by Assertion.’

Fear as a Manipulation Techinique:

When a propagandist warns members of her audience that disaster will result if they do not follow a particular course of action, she is using the fear appeal. By playing on the audience’s deep-seated fears, practitioners of this technique hope to redirect attention away from the merits of a particular proposal and toward steps that can be taken to reduce the fear. [Source. Emphasis added.]

Fear, Guilt and Intimidation. Leadership is feared, and disagreeing with the leadership (or even just questioning it) is akin to disagreeing with God. Breaking sessions are used to destroy resistance, where members have their motives and character attacked until they fall into line again. Some cults keep “sin lists” which are used in these sessions. Even in day to day interactions outside of breaking sessions the leadership can use sin lists and similar knowledge to intimidate and control. [Source. Emphasis added.]

Some Mary Kay recruiters use Fear as a means of recruiting women into Mary Kay.

In fact, at least one National Sales Director uses such tactics as suggesting that women will be left penniless and broke if their husbands ever leave them.

Women who have left Mary Kay often comment about the ‘fear’ they felt about disappointing their Directors or National Sales Directors, of being ostracized from their “friends.”

In cases where debt caused by Mary Kay has caused marital difficulties, the fear of ‘losing’ Mary Kay is used as a tool to keep women in Mary Kay. It is not uncommon for Mary Kay’s victims to become convinced that it is better to divorce than to leave Mary Kay. Unfortunately, divorces do happen as a result of Mary Kay Cosmetics.

In other cases, according to Mary Kay whistleblowers, when Mary Kay consultants (or higher ups) begin to express doubts about Mary Kay to their superiors, the superiors use personal information gleaned from “I-Stories” and other interactions to subdue the victim-consultant’s doubts about leaving Mary Kay.

Simply put, Proof by Assertion is the concept that, if you repeat a lie often enough, it becomes the truth.

Proof by Assertion as defined:

An assertion is an enthusiastic or energetic statement presented as a fact, although it is not necessarily true. They often imply that the statement requires no explanation or back up, but that it should merely be accepted without question….The subject, ideally, should simply agree to the statement without searching for additional information or reasoning. Assertions, although usually simple to spot, are often dangerous forms of propaganda because they often include falsehoods or lies. [Source, emphasis added.]

Many within Mary Kay Cosmetics’ use Proof by Assertion in selling the company to those they are recruiting and, sadly, they repeat the falsehoods to themselves when objective facts–like mounting debt–are staring at them in the face.

This article on Pink Truth by a former Senior Sales Director explains how Mary Kay’s Proof of Assertion helps those within Mary Kay to mask the truth from each other and, more importantly, from themselves:

I learned that united in identical speech, parroting the same information, regurgitating the same objection covering devices, and always talking “upward” to the one that has the position you want, were some of the ways that National leadership prevents the premature crumbling of their empires. Evaluating results is equal to negativity and negativity unchecked can be a very seductive draw, that causes the skid into consultant heaven.

And all the while I believed this, it never occurred to me to evaluate that concept. We Directors were a united wall of truth, saying the same things, believing the same things, avoiding poor performers who might complain, and silencing our own doubts with constant tapes and affirmations. By only allowing the “positive” in, we kept the RAH RAH strong and thwarted any attempts by objective voices to crush our belief. Mary Kay Cosmetics was the best opportunity for women, period. And nothing you can say can pop that pink bubble.

As long as no one knew what was happening in each other’s business, we could pretend that while we were drowning in inventory and credit card debt, we would find a way out, because “So and so” just won her caddy… or “so and so” just had her best month ever. Success was possible, even if nobody ever told you how. Believe and achieve! [Emphasis added.]

Although many within Mary Kay will not see the techniques that have been used on them until it is too late–and many never will–it is just as important for others to understand Mary Kay Cosmetics tactics before they get in too deeply.