In the last century, there was a popular TV series–a sequel of sorts, based off of the 1960s Star Trek. In the 1990s version, called Star Trek, The Next Generation, Captain Picard and crew occasionally battled a recurring antagonist species was a ‘pseudo-race of cybernetic beings’ called the Borg.

No single individual truly existed within the Borg Collective (with the possible sole exception of the Borg Queen), as all Borg were linked into a hive mind.

The Borg was a notable ‘pseudo-race’ antagonist because it did not allow for individual thought–all of the cybernetic beings were of a singularly mind, controlled by the Borg brain.

Why the Borg was so dangerous was that individualism was not allowed–individuals would be assimilated into the Borg. Resistance was futile.

Within the Pink Fog of Mary Kay Cosmetics, very often, the traits and behaviors of the Mary Kay sales force bears a striking mental resemblance to the fictional ‘pseudo-race’ of the Borg.

Although they are often referred to as Kaybots, the women within Mary Kay’s sales force are not likely part of a ‘pseudo-race’ of cybernetic beings.’

Many of them do, however, act with extremely Borg-ish behavior as they are expected to refrain from critical thinking, avoid negativity (even if it is the truth), and shun those who question the Mary Kay Borg.

In fact, in the Borg-like world of Mary Kay Cosmetics, as with other cult-like groups: “Questioning, doubt, and dissent are discouraged or even punished.”

A case in point is the Facebook thread below that started as a result of a debate over the ethics of Kaybots launching fundraising schemes in the wake of the Moore, Oklahoma tornado.

The original ‘debate’ thread was removed from the group and this thread was started to remind the Mary Kay group that negativity and personal opinions are not allowed. The Kaybots, as you can see, are reminded not to post or express anything that may be “personal opinion or of negative nature.” 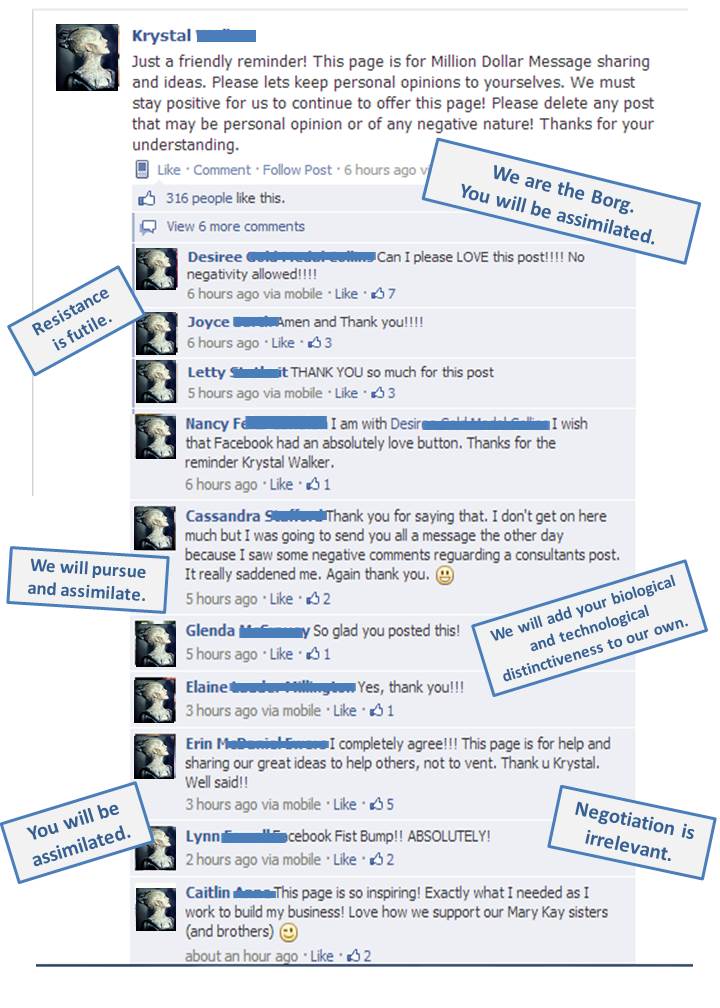 As one of the commenters stated, “No negativity allowed!!!!”

Just another example of Borg-like nature of Mary Kay Kaybots.