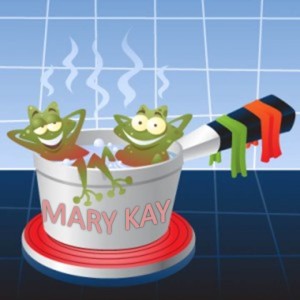 In other cases, there are those women who begin their careers with Mary Kay as honest as they can be.

However, over time, like frogs in a pot of water that is slowly starting to boil, they get so far into the Pink Fog that they fail to realize the amount of Mary Kay deception around them from higher ups like Dacia Wiegandt and others–until it is too late.

They get so far into the hot water of deception themselves that they fail to recognize the cult-like tactics that are used continually on those in the Pink Fog.

Here is one example in a letter written* by someone who either inadvertently does not see, has not been in Mary Kay long enough, or purposely chooses to ignore the tactics used within the company she so vociferously defends.

To Whom it may concern,

I just want to let you know. I am a struggling MK IBC. However I have a wonderful Director who not only is a strong Christian, but works with me and encourages me when she doesn’t have to.

She has let me buy things from her inventory and mailed them to me to get to my customers, more quickly than if I had made an order from MK.

She has done this the past two times, because I have had small orders and she doesn’t want me wasting 9.75 shipping charge on a 30.00 order.

Before selling MK again this time, three years ago I sold it and did have a horrible experience and a bad director!

If you are working with honest, God loving women in your unit, you’re not going to experience the things like some of these women have.

I am also a very strong, independently minded young woman and I don’t get pushed into buying things I can’t afford, nor would I ever keep something from my Husband.

If I had, had a Director be unprofessional and try to pressure me into ordering inventory I could not afford, she would get her rear end handed to her very quickly.

I like selling MK, it’s not easy, you will hear a lot of “NO”! As long as your goal is to sell a product you believe in, be honest, and helpful and kind to everyone then God is going to help your business grow.

Yes I’m in this to make money, but as an esthetics student and a practicing Makeup Artist, I also do this to teach women correct skin care for their skin types, and to help them find products for them to have their best skin possible.

I don’t strictly use MK products, but a vast array of different products and cosmetics lines. I suggest different lines to my customers as well, yes even MK customers.

This website is very negative, and I know there is bad experiences within every company, but to call this a CULT is so far fetched.

I’m a leader, not a follower, and I can tell you I run my MK business by my rules not by anyone else rules. And it’s working, slowly but surely. A successful business is never made overnight, it takes years and hard work. There’s not a quick fix to everything.

So if you are going to sell MK, don’t be dishonest, a manipulator, liar, pushy and obnoxious, if someone tells you NO leave them alone and say thank you and move on. If you treat others the way they want to be treated you will be successful. I however don’t agree with the MK bashing that is going on here.

I understand your need to vent but this is very vindictive, and let me remind you throwing scripture of our Lord all over your website does not, in fact, make what you’re doing right or okay! I hate when people twist God’s words and scripture into what they want it to mean, and for their own use instead of really studying it and walking in His word.

* — The above is was received and posted verbatim, as written. The only changes that have been made have been formatting paragraphs.

A Note to Ms. Chambers: The ‘throwing scripture’ (as you call it) is no more (and certainly a lot less) than that done by your overlords within Mary Kay every time they use the phrase “God first, Family second and career third” then proceed to use deceptive and manipulative tactics on their prey.

4 Responses to "Frog Legs Found In The Mailbag: A Mary Kaybot Shares Her Disgust (and Hypocrisy)"