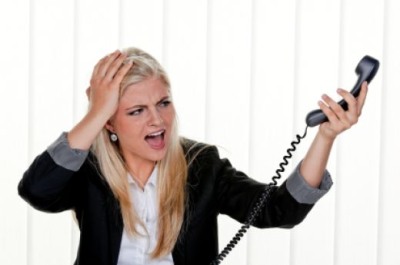 Most people who have ever been bothered by telemarketers know that if you ignore them long enough, they eventually give up.

Unfortunately, that’s not the case when it comes to desperate Mary Kay predators on the prowl for new prey.

After you read this script from a Mary Kay National Sales Director, you might also wonder: If this isn’t stalking, what is?

Why doesn’t she answer her phone?

Are you having difficulty trying to reach your prospect for a facial? Has she decided she doesn’t want a facial after all, so I should throw away her number — or should I stick with it until I get a hold of her, because maybe she’s destined to be an awesome customer or even a recruit?”

Any of the above could be true! So here’s a great way to short-circuit this situation, reduce your time and frustration following up with no-answer warm-chatter leads.

After about 4 – 5 days, when you’ve tried reaching the prospect at several different times of the day and have left one message, leave another message and say the following:

It occurred to me that perhaps you’ve changed your mind and would prefer not to get together for a complimentary Mary Kay pampering session — if so, just give a quick call back to me and let me know it’s not for you right now. That way I won’t keep trying to phone you.

However, I realize that most likely you’re just super busy (which is the MAIN reason to schedule a rejuvenating facial and makeover with me!) and my previous calls have simply caught you away from the phone. In that case, just give me a quick call to let me know you still want to be pampered!

________, your __________(cheerful attitude, happy smile, sharp-looking appearance, etc. — whatever was the case) told me that you’re someone I’d like to treat to the Mary Kay experience, so give me a quick call and hopefully we’ll talk soon! By the way, I’ll likely try you back until we connect! ”

I have found that (assuming you select warm, courteous women to warm-chatter!) most women will respond to this. The ones that are blowing you off will be reminded that you’re a real person (not a computerized calling machine!) and will (now that you’ve given permission) let you know if they’d prefer to forget it for now. But my most frequent experience is that they will call, apologize for being so hard to reach (usually, they get MY message service!) and tell me to persist in calling back! I’ve had several that have taken up to 3 months to actually talk to without the machines in the middle — but they had called to at least let me know they still were interested in the facial. And, they were ultimately HUGE selling appointments and are now a happy part of my customer base.

Be BOLD! Be direct! Women will respond with respect!

Reach for the Stars! Be true to your dreams.
Hugs, Jessie NSD

Apparently, these Mary Kay stalkers don’t realize their prey does not want to talk to them.