“You can spend all day covering a turd in pink frosting and calling it a ‘cupcake.’
At the end of the day, though, it is really still just a turd.” — author unknown

How much damage to its carefully-choreographed culture would an admission of the truth–that Mary Kay Cosmetics really is a multi-level-marketing company–do to Mary Kay’s deceptive “fake it ’til you make it” image?

Those may be questions being asked around some corporate meeting rooms in Texas right now, thanks to Mary Kay National Sales Director Gloria Mayfield Banks.

You see, anyone who has come within earshot of a Mary Kaybot trying to convince a target to join the pink pyramid has probably heard the insistence (or delusional denial) that Mary Kay Cosmetics is not a multi-level-marketing company but a “dual level” or “network marketing” company.

It’s taught by word of mouth ad nauseum, as well as found in documents, as is the case here:

Despite the fact that both of the statements in bold above are false, the predators within Mary Kay Comsetics’ sales force continue repeating the fantasy to both their converts and themselves so often that it is accepted as truth.

Well, Gloria Mayfield Banks has now set the record straight when she inadvertently admitted on Facebook that, Mary Kay Cosmetics is, indeed, a multi-level-marketing company.

On Tuesday (Oct. 22), Banks used her Facebook page to get her multitude of minion followers to “like” the Facebook page of the Direct Selling Association (DSA).

The DSA is the trade association that represents multi-level-marketing companies, including Mary Kay Cosmetics, through lobbying and contributing to politicians.

Banks, on her Facebook page, announced that she was going to Washington for the DSA’s lobbying day to “represent Mary Kay on Capital [sic] Hill.”

In her announcement, Banks let slip that the DSA represents companies that primarily use “multi-level marketing compensation plans.”

Go like this page ( Direct Selling Association ) and then follow with me tomorrow as I represent Mary Kay on Capital Hill. Wow. The Direct Selling Association (DSA) is the name of several similar trade associations in the United States, United Kingdom, Australia, Malaysia, Singapore, and New Zealand that represent direct selling companies, primarily those that use multi-level marketing compensation plans. On behalf of its members companies, the DSA engages in public relations and lobbying efforts against regulation of the multi-level marketing industry, and it funds political candidates through a political action committee. [Emphasis added.] 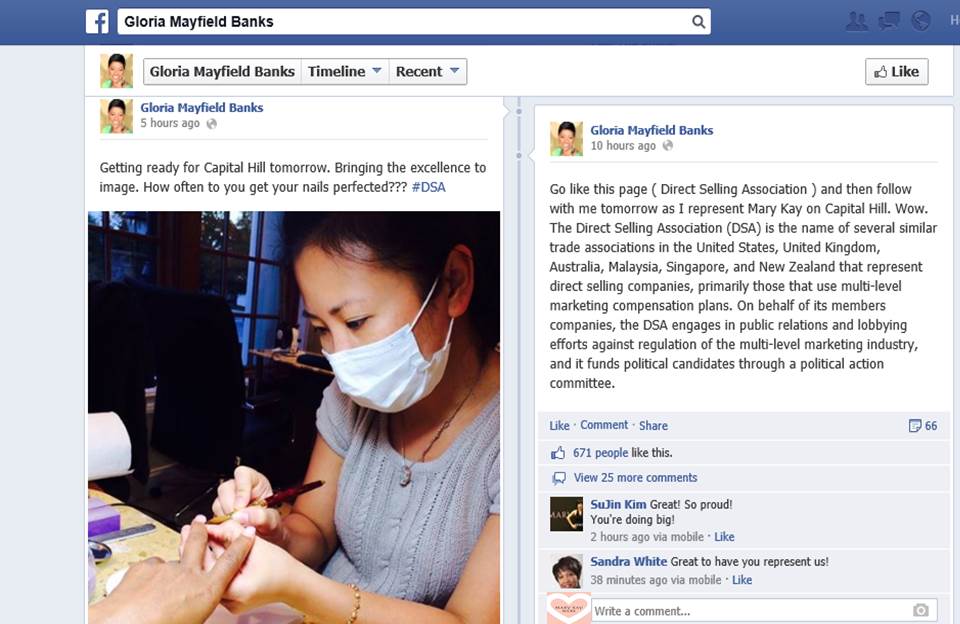 Now, despite the fact that Mary Kay’s marketing plan is not taught at Harvard, Gloria Mayfield Banks did attend Harvard University–a point which she and Mary Kaybots use in their recruiting tactics.