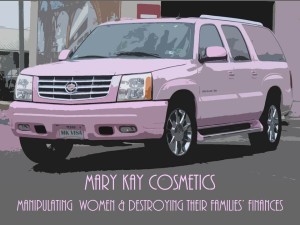 When my twin daughters were born, I found the financial reality of caring for two infants overwhelming.

Since graduating college, I’d always had a job. Occasionally, I’d even supplement my income with a second job waiting tables. But my two beautiful baby girls changed everything.

When I returned to work after maternity leave, I calculated that I was taking home about $20 a day after expenses, which barely covered my commute. So, I decided to leave my job and stay home.

Squeaking by on my husband’s income was very tough, so I cobbled together an assortment of part-time jobs to bring in a small amount of money.

Periodically, I would feel frustrated and look for a new job, but without earning advanced degrees (which would entail big loans), there simply weren’t jobs in my area that paid enough to cover all the childcare I’d need and still have some income left over for me.

One evening, another twin mom I knew vaguely posted an offer for free facials on Facebook. Apparently, she was now selling Mary Kay and needed to meet a quota.

She sounded desperate, and pleaded for people to help her by booking appointments. I like helping others, and the thought of leaning back in a chair while someone massaged my tired skin sounded fantastic, so I scheduled an appointment.

When the appointment began, it became clear that this wasn’t a facial at all. In fact, the woman explained, “Mary Kay women do not put our hands on other women’s face.” It was just a plain ol’ product demonstration.

I was disappointed, but she was so sweet and so earnest that I went along with it. I actually had fun, and when it ended, she gave me a DVD to watch about joining the business. I almost laughed out loud, but she said she’d give me free product if I watched the DVD, so I did.

While I’d never considered an at-home business, I did like the products, and the DVD made it seem likely that I could make a fair amount of money in a short time, by holding just a few appointments a week.

In fact, it seemed like Mary Kay could be the answer to my unrest at home and my desire to earn more without neglecting my children. So, I signed up.

I was nervous and ashamed to tell my mostly liberal, non-church-going circle of family and friends about this, bracing myself for comments about being “anti-feminist” or disapproval for getting involved with a Christian company.

Surprisingly, though, most people seemed interested and wanted to try the products out. After all, Mary Kay had been around for a long time and it seemed everyone had seen a Pink Cadillac.

My parents even had a neighbor in their upscale gated community who was a national director. Her pink Escalade often drove by, and they saw the lifestyle Mary Kay afforded her family, so they didn’t doubt the company’s legitimacy.

I chose to make an initial inventory purchase of $600. I rationalized to my husband that if my venture failed, I’d have my own product stocked up for a few years.

I went through all my training materials, and again had the nagging feeling that some of the information was misleading.

I was told we weren’t stalking recruits…yet, wasn’t that how the units were growing?

At a consultant meeting, the director who chaired the meetings mentioned that she sold about $1,500 of product each month. What? That meant she was only pocketing about $700 from product sales…yet her lifestyle indicated an income of at least ten times that about.

Clearly, the only way to make a decent income was through commission checks off of the product purchases of new recruits.

The whole business was starting to look ugly, but it was wrapped in shiny, pretty paper.

Directors constantly showered consultants with praise, and frequently stated with fervent conviction that they were helping other women enrich their lives.

I wanted so desperately to believe that Mary Kay was the solution for me and my family, that I did everything my director said.

I started to view all the women in my life, old and new, with a sharp eye, gauging their investment potential and likelihood to let me approach them about the company.

Even my dear, sweet, non-make-up wearing mother was a target, as I forced her to submit to a make-over she did not want or need.

I cringed on the inside each time I promised someone a “facial”, knowing that my promise of nice, chummy girl-time was a lie, worded to get women to loosen their purse clasps.

My sales totaled over $7000 in my first year…but when I took away all my costs that meant I barely broke even.

My director, thankfully, didn’t pressure me to buy inventory or recruit more people.

Because of this hands-off approach, though, she was in her own personal hell from her directors, who seemed to be overly involved with her life.

I had little respect for my National Director, and was mystified as to why people in my area seemed to admire her. She produced training and recruitment materials and insisted that everyone in her area purchase them from her. I thought this was a requirement, but when I looked on the corporate website I realized I did not, in fact, have an obligation to buy or use any of these things.

She also created scenarios that seemed scripted solely to have other Directors fawn over her wealth.

Once, she announced that there would be a contest, the grand prize of which would be a weekend in her country cabin. I had no interest in that; why would I want to leave my family to visit someone else’s vacation cabin?

Yet I seemed to the only person nonplussed – everyone else shrieked along with the Director running our meeting when the prize was announced.

And the cabin threat was just one example of mandatory time spent away from our spouses and children.

A recruitment line used to lure people into Mary Kay is that the business would allow more time for our families – yet we were expected to attend long weekly meetings and, once a month, drive three hours each way to our area meeting.

I went once. The meeting began with a short video produced by our National’s husband. I was shocked to see Disney animation when it began.

He’d apparently just stolen the footage for his own use. I think it was the stolen Disney footage that finally made me see how ugly everything was under the makeup.

My director, having been driven into bankruptcy herself, finally quit and I just quietly stopped.

I did not, thankfully, lose very much money.

What is most upsetting to me is the false hope I was given.

This was not a mistake on the company’s part.

It was intentional manipulation of women’s often fragile place in our economic structure, to get us to generate as much money as possible for them, no matter what the consequences–all while pretending to be helping and enriching our lives.

Since ending my association with the company, I’ve had more time to spend with my family and pursue other interests. But I have grief over what I’m now thinking of as my “lost year”, spending so much time away from my husband and children, chasing the pink bubble of Mary Kay…only to have it pop and vanish when I finally got close enough to see what it truly was.

I was led to believe that a large number of women could make a decent income by selling Mary Kay. In fact, only a tiny percentage of women who become consultants are able to generate a decent income.