Apparently, Mary Kay Ash’s instructions for her cult-like company to follow the Golden Rule is falling on deaf ears these days.

You see, for all the glitz and glamour bestowed upon Mary Kay’s “King of Personal Sales,” Jim Cundiff recently posted a rather petty post on his public Facebook page wherein he gloated over the (supposed) firing of Detroit’s WDIV news anchor Lauren Podell.

As background, based on his post, it seems that Jim Cundiff has a certain dislike for Lauren Podell due a positive story she did on Cundiff back in 2011 when he received the famed Mary Kay pink Cadillac.

The positive puff piece got a lot of airplay and, instead of being grateful for the attention it received, Cundiff apparently took exception to the story stating that he was the first man to ever win a Mary Kay Cadillac. [Why that matters to him is anyone’s guess.]

Fast forward a couple of years later and Lauren Podell, not knowing she had a ‘hot mic’ dropped the ‘F-Bomb’ while on location at a fire.

For that lapse, according to Cundiff’s Facebook post below, Cundiff thought Podell had been fired* and went on a tirade against the news anchor.

Lauren Podell got hers today! See what happens Lauren when you hurt someone else for your own good! For those of you that don’t know what I’m talking about she did the news story about me when We earned our Pink Cadillac that went internationally and nationwide on CNN because she BOLD FACE lied and said that I was the first man to ever drive pink! When she was clearly told I was NOT!!! Well Lauren it looks like someone else got the last word in today ! Enjoy unemployment… 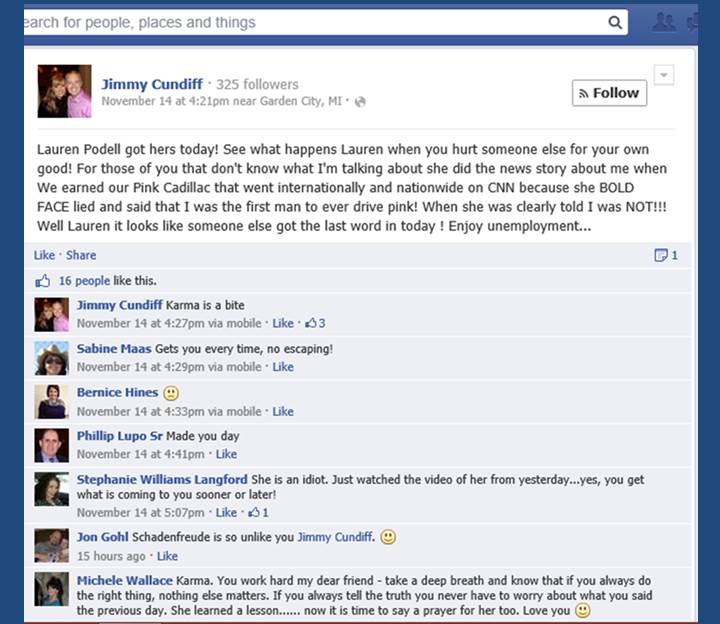 * Well, according to this post, Podell was not fired, but that has not been verified as of this writing.

However, the irony of Cundiff’s post is that, for all the deceptive and predatory practices Mary Kay’s sales force use on their unsuspecting targets that cause them financial harm, he takes exception to an alleged lie that actually benefits him through positive publicity…then merrily gloats when he believes the woman is fired from her job.

So much for Mary Kay’s Golden Rule.

According to Mr. Cundiff, Lauren Podell has allegedly* apologized to Cundiff: 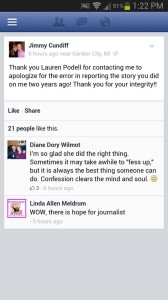 * Note: Cundiff’s update has since been deleted from his public timeline so it remains a question whether or not Ms. Podell did, in fact, apologize to Cundiff.