For many men whose spouses have been manipulated into the Pink Fog of Mary Kay Cosmetics, there is nothing more agonizing than watching the slow annihilation of their families occur right before their very eyes–and being powerless to stop it.

Eventually, as the corrosive effects of Mary Kay Cosmetics’ manipulative tactics claim more and more of their victims, as often happens in cult-like organizations, spouses and loved ones are often pushed away as being “negative” if they express any concern about what is occurring.

The alienation of loved ones–especially spouses–often leads to the destruction of many of the Mary Kay victims’ relationships with anyone who is not inside the Pink Cult, leaving the victims alone in the clutches of the pink predators.

For the husbands and children left to witness this destruction as their wives or mothers become consumed, yet powerless to stop it, it is nothing short of living a life in Pink Hell. 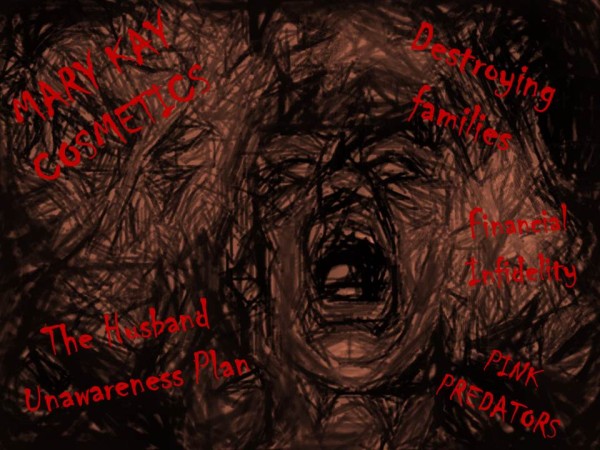 Under a post on Pink Truth, written by a husband struggling with his wife’s Mary Kay career, two more soon-to-be ex-Mary Kay husbands commented, revealing their own anguish at losing their wives (and families) to the Cult of Mary Kay Cosmetics.

One husband (and father) tells his story about how he is living in a Pink Hell, thanks to Mary Kay:

I have sat quiet for far too long myself. I am in the Pink Hell. Living the statistical nightmare that Mary Kay is. And like many husbands, I initially supported my wife in her endeavor to make extra money.

As this husband tells it, while his marriage wasn’t perfect, it has now been destroyed:

Our intimate life died. Then it all fell apart. We separated a few months ago. I can’t live with this evil Pink Monkey on my back…let alone the family’s back. I am trying to find strength in God and renew my efforts to be a more Godly husband & father. And despite us trying counseling, I don’t feel anything for her anymore except sadness & pity. She never wants to be told she is wrong or what [sic] to do and will cut you out if you try.

She keeps buying inventory and barely moving anything. Spends countless dollars at Starbucks, on cigarettes, clothes that look hideous on her…especially since she ignored all the warnings she herself asked me to give her and ate to oblivion, sat in bed all day & night watching tv and texting women on her phone about MK. She was a vibrant, smart, sexy, beautiful woman. Now I don’t know who she is. And she doesn’t care.

If there were a small spark left for me to love her or salvage our marriage, I would need a miracle from God. Even if we never reconcile, I would sacrifice all the blessings God has stored for my entire life, to find a Mary Kay Intervention group/program to awaken her from the Pink Nightmare and get her out of it.

I wish Mary Kay Cosmetics would be outlawed and forced to close its doors. Or any company like it. [Formatting and emphasis added.]

Under the same Pink Truth the same post, another husband shares how his marriage was destroyed and was surprised to learn of the financial infidelity his wife was likely committing:

…[M]y marriage was what I thought to be “normal” it was up and down but not anything I thought was out of the ordinary. [E]nter MK 2 years ago and everything pretty much turned upside down for me and our kids.

I tried my best to “support” my wife in her endeavor by trying to overlook the obvious like the fact that she was constantly “working” her business and warm stalking any female that made eye contact with her (I wanted to crawl away).

After she lost her job, she really doubled her effort on working MK fulltime. [U]nfortunately, I pretty much became a single father of two young children who would ask me why mommy wasn’t home, why does mommy work so much, why does mommy have to go to meetings, you get the point.

Anyway, soon, I was being called a negative person and I was bringing her down. [F]ast forward to d.i.q attempt no. 2 and she was totally engulfed into the pink cloud, after that failed again is when we really took a turn for the worse. I didn’t support her MK efforts I wasn’t onboard the MK train. I was a major negative person in her life.

Now longer story short were in the midst of separating, so I have been going about getting household bills moved into my name only to find out that the majority of which haven’t been paid in months, this was what I got for letting her run the checkbook I mean she was a collage grad majoring in accounting!

My advice to you is check ALL your finances and get copies of your credit reports because you may be in for a real rude awakening like I was, I never had any idea that this was going on and the only explanation I can come up with is that it all, all went to MK.

Good luck to you and remember your not alone, unfortunately there are many others just like us with very similar story’s. [Formatting and emphasis added.]

Unfortunately, like those men above (and many more like them), Mary Kay Cosmetics’ predatory sales force and its manipulative tactics rips families apart from the inside out.

It is hell to watch–and even worse to have to live through.

If your spouse has been targeted by Mary Kay predators, here is some reading for you to prepare yourself to fight for your family:

In addition, be sure to the read the posts and get more information at Pink Truth.